Posted at 19:36h in Art by pollyrockbergerartist 2 Comments
0 Likes
Share

One of my recent series is ‘Safar: journey’, and it’s inspired by the imagined wanderings  of my ancestors through millennia from the biblical Middle East to Europe. Below is “Caspian Journey”, my  imagined plan of the route, and clearly I’m no geographer, although I’d like to think you can make out a few oceans – the Mediterranean, Black and  Caspian seas – even though their relative positions might owe more to the exigences of aesthetics than to the actual terrain.  Making the Safar series has been something of a journey for me too, albeit by no way as momentous, hazardous or extended as for the ancestors,  and after a  long blogging gap, I thought I’d like to post about the  journey I travelled towards making this series. 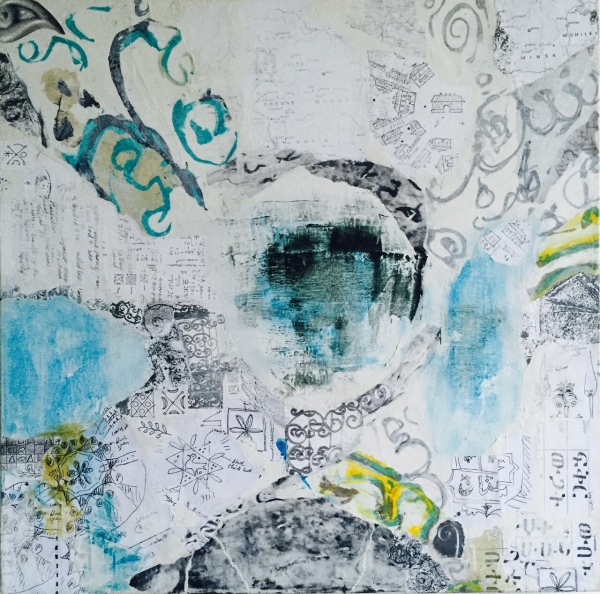 You may remember from past posts that I had an unexpected medical contretemps a few years ago. Heavy-duty surgery to correct a random medical mishap descended out of the blue, with pain, shock, and a lengthy interruption to life in general – and to life as an artist in particular. For art to happen, I need to have nothing uppermost in my mind except the subject I’m working on and the paint….or prints, paper, or scissors. There also has to be equanimity. Anger is especially inimical to creativity, and I guess after the shock I’d had, a light unconstructive dusting of that wasn’t too far from the surface. This disturbed my usual studio vibe. Everything was in place just as it had always been – my music (often Miles, but pretty eclectic) a heady wafting of incense or perfume, and the suspension of life outside the studio except for the occasional descent to stir a soup; but something had shifted – my confidence and self-belief had gone into stasis with an unsettling sense of life’s unpredictability 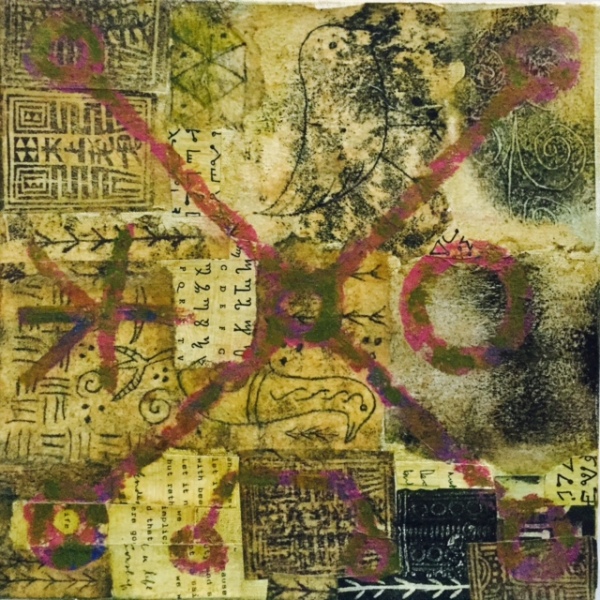 We went to Israel for some winter sun, and mooching in the Binyamin craft market in Tel Aviv, I saw a particularly appealing hand-made amulet with the usual legends : luck, joy, celebration, prosperity, plenty. I was attracted to it, but I remember asking myself what was the point of buying it when these mantras and invocations, however regularly intoned in the past, hadn’t managed to prevent near-catastrophe. Such bright wishes seemed to have nothing to do with me. I put the little piece of silver back on its velvet cloth, and went to sit down for a coffee with our friends. As conversation and laughter flowed around the coffee cups, another dialogue was taking place deep within me. I was telling myself that unease had to be fought, that a person who no longer hoped for luck, health, happiness, plenty, and joy, didn’t deserve them. Bubbling beneath our easy chat was brewing an irrestistible urge to rush back to the market, to find and purchase the little amulet, and start to reabsorb its message of renewal for heart and mind.

The cups were empty, chairs scraped, and I hurried back to find the amulet again. I brought my new talisman back to London, the inscriptions winking their message at me on the studio table in front of me; I couldn’t help but absorb its positivity as it began to restore me to joy in my work, and in general. I started to make connections between the Hebrew words and their equivalents in Farsi, which  I have been studying for several years. Within a few days I was at the art supplier buying a rather expensive and substantial canvas, and started working on a piece about these words of hope and joy in the many languages my ancestors might have heard or spoken on their ancient journey from the Middle East into Europe. How many times must their journeyings, their very survival have rested on the same hopes, wishes, and self-belief as embodied by my little scrap of silver. My heartfelt thanks go to its maker, jeweller Smadar Dagan Yehieli; its size belied its impact.

I browsed exotic fabrics in Berwick Street’s extraordinary Cloth Shop and filled my studio with delicious samples for collage and monoprint experiments, shaping the fingers of an amuletic hand, or ‘hamsa’, on my new canvas. There’s nothing as exciting as a pristine and substantial blank canvas; what a joy to be back in business with a new project at one’s fingertips. Here below is ‘Amulet with word and symbols’, and I invite you to look at further recent ‘Safar’ pieces on my Facebook Page at /pollyrockbergerartist 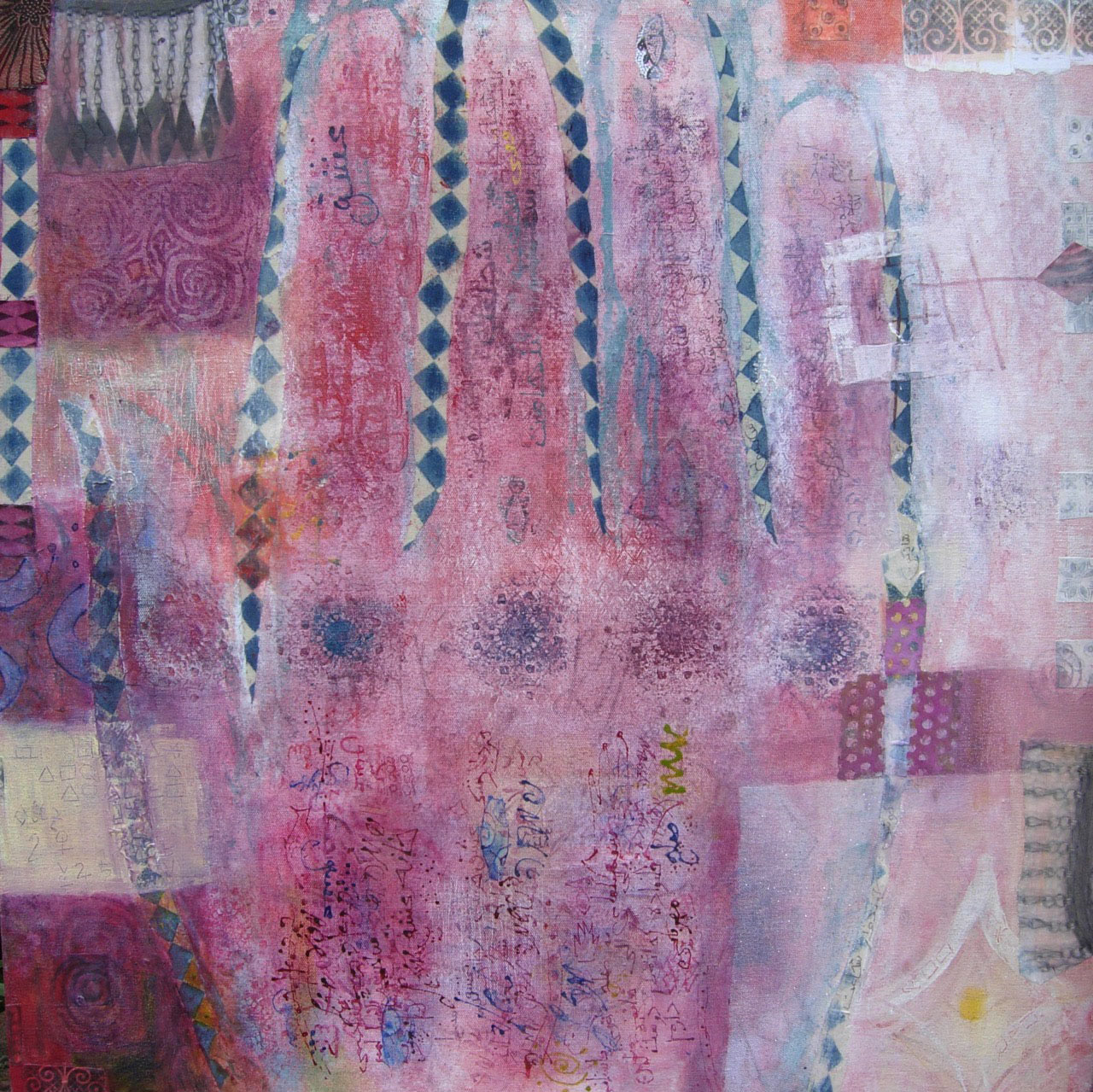 poll/بل  : bridge – my signature, and my name in Farsi.

This website uses cookies to improve your experience while you navigate through the website. Out of these, the cookies that are categorized as necessary are stored on your browser as they are essential for the working of basic functionalities of the website. We also use third-party cookies that help us analyze and understand how you use this website. These cookies will be stored in your browser only with your consent. You also have the option to opt-out of these cookies. But opting out of some of these cookies may affect your browsing experience.
Necessary Always Enabled

Any cookies that may not be particularly necessary for the website to function and is used specifically to collect user personal data via analytics, ads, other embedded contents are termed as non-necessary cookies. It is mandatory to procure user consent prior to running these cookies on your website.